Salida is a black hole that few seem to be able to escape. I live to tell the tale, for now.

As I departed from Leadville, I was still stuck in the highest gear. That was a minor issue though, as the route into Salida is almost all downhill, following the Arkansas River. A few small bumps in the elevation profile were no match for my quads of steel.

When I arrived at the local hostel, I ran into Shane again. He is also travelling on his bike and I had met him earlier in Leadville. We explored town and got very excited when we discovered the Fiber Festival. Images were dreamed up of whole-wheat linguine galore, lentil stew cooking competitions, and long queues in front of the porta potties. Reality came in the disappointing form of about a hundred grannies selling wool. We consoled ourselves by watching the 10pm start of a 200 km mountain bike race instead. I’m pretty sure none of the participants survived this. RIP, crazy people. 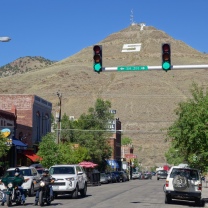 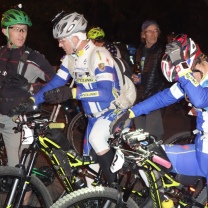 The bike part I had ordered did not arrive on Saturday, which meant I was stuck in Salida for another two days. To kill the time, Shane and I set out to climb Mount Shavano, one of the 14er peaks in the area. We hitchhiked up to the trailhead and started our ascent. It was a long uphill, but we persevered and made it to a saddle point at just over 4,000 meters, where spectacular mountain views and stormy conditions awaited. The glory of the saddle came at a price though: My legs have been hurting for the past five days. Quads of steel my ass. 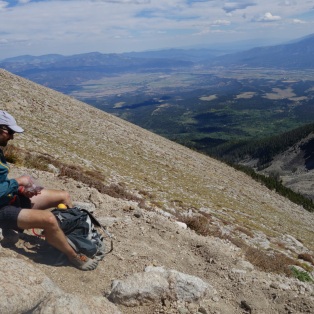 While I was taking lots of pictures, Shane applied his Irish cheerfulness to our fellow mountaineers and found us a ride back into town. We had a victory beer in a bar, followed by regular beer in the hostel, where we were soon joined by a group of other folks. The majority was a fun bunch of through-hikers on various long distance trails. The exception was a guy from Texas, who made everyone drink Tequila and then proceeded to pass out on the floor. A combination of ear plugs and alcohol had me peacefully sleep through all the drama of him nearly choking on his own vomit a few hours later. Shane dutifully cleaned the floor of our dorm at 3am.

Both Shane and his special friend left the next morning, while I was sticking around to wait for USPS to deliver my parcel. Some of the other people had planned to leave, but fell victim to the black hole that is Salida. I expect they may be there for a long time to come. The part I had been waiting for didn’t get there until 5pm, but Scot at the local bike store was a total hero. We worked on the hub for half an hour in the evening and he refused to charge me anything, despite my protests.

Being mobile and able to shift gears again called for celebrations and so pizzas and beers happened once more. I vaguely remember being forced to sign a vow to return to Salida, ride a dromedary across Utah, and marry a tiny wannabe vegan in Vegas – recorded for posterity in the hostel guest book. 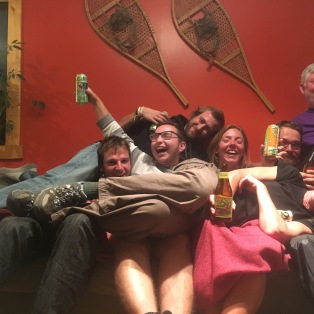 The hangover was moderate and – to the best of my knowledge – nobody had been sick on the floor that night. I finally managed to leave Salida behind after breakfast, while everyone else seemed to be justifying why they would stay just this one day longer. The route took me up and over Monarch Pass, and I got plenty of use out of my freshly regained granny gears. After I had been hammered by hail on the downhill for a while, I made my way into Gunnison, where I snatched the last bed in a hostel. I met Nick again, the cyclist who had crashed when I was staying in Leadville. He looked quite bruised still.

The following day was long with a lot of climbing, as I headed further west through beautiful rock formations. Rather than continuing on into Montrose, I turned into Black Canyon National Park, and regretted my decision not much later, as I was struggling up the steep slope to the canyon rim. It was dusk when I reached the campground on top. The discovery that I had brought no money to pay for a site was followed quickly by the discovery that my tent pole had snapped. That was the cue for the rain to start. With the help of a few juicy swear words, I managed to pitch the tent in a suboptimal yet somehow acceptable manner. Comfort levels were moderately low, but no-one seemed to care about my not paying the camp fee, so I guess I can’t complain on the value for money front.

I duly checked out the canyon in the morning before descending into Montrose for breakfast. A piece of a copper pipe I picked up from a hardware store, combined with copious amounts of duct tape made for a satisfactory solution to my pole troubles. To test the hypothesis that it would hold up the tent, I pushed on to the campground at Ridgway state park. The views over the lagoon were amazing and the pole seemed to resist even the strong winds up on the plateau I had pitched on. 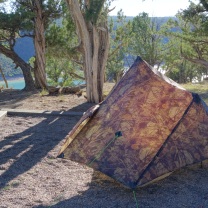 It was 7am and freezing cold when I got up. I spent the next hour flip-flopping between thawing my hands under the dryer in the bathroom and packing up my gear. I seriously need to drop to lower altitudes soon. The day ahead was another tough ride with a good amount of climbing. Just as I was approaching the top of the first pass, I heard a familiar voice with an Irish accent shouting out behind me. I hadn’t expected to see Shane again until Utah at least, but here he was, telling me stories of his adventures since he had left Salida. We cycled down to Placerville together, where we caught up over coffee, before we each went our separate ways again.

For me, that meant a long and arduous climb up to Lizard Head Pass in the San Juan mountain range. My initial gloom at this prospect was soon replaced by the joy of riding through a stunning alpine environment. While the road was busy and with little or no shoulder, the autumn colours all around me more than made up for the struggle. 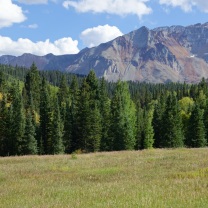 I got to a small mountain village called Rico, where I will be staying in yet another hostel. And yes, my leg muscles are still sore.