Replacing my sole piece of cutlery: 3.95 dollars. Eating dessert for dinner: 8 dollars. Getting caught in the fiercest storm of my life: Bryceless.

If you asked me what day it was today, I probably wouldn’t know. In fact, I’m sometimes unsure about the month. I guess it’s not a big surprise then that I forgot to buy groceries when I got to Green River, and found myself standing outside a closed shop on Sunday morning. The only other option to stock up for the next two days was a small gas station convenience store. Guess who didn’t get his five-a-day.

Continuing my zigzag route through southern Utah, I cycled along the freeway for a while, but then turned south onto Highway 24. This was a lot calmer and nicer to ride than the road from Moab. There weren’t many reasons to stop though, so I put in my earphones and let the desert pass me by.

The goal for the night was Goblin Valley State Park. It features a landscape full of phallic sandstone pillars, apparently reminiscent of goblins. I doubt that was the initial association, but Knob Canyon State Park might have attracted the wrong crowd. In any case, I got myself lost in this maze of red rock for a while, and spent the night in the park campground, surrounded by colourful cliffs. 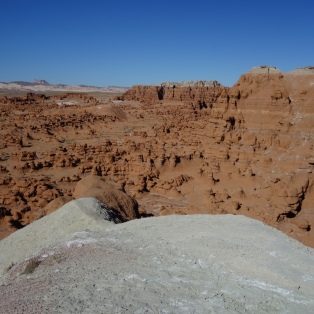 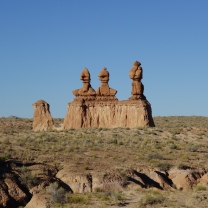 In order to get out of Goblin Valley in the morning, I had to backtrack for about 10 km until I reached the highway again. From there, it was a fast run into Hanksville, where a burger fell victim to my stomach. The afternoon ride took me west. I had planned to go as far as Capitol Reef National Park and stay there for the night, but the campground was full, and so I climbed back out after I had taken a satisfactory amount of pictures. I pitched the tent under a small tree just outside the National Park, ate crackers with cheese, stared into the starry night sky, and listened to the coyotes howl. 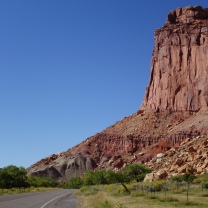 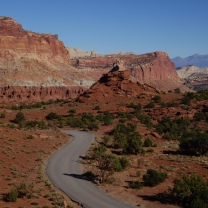 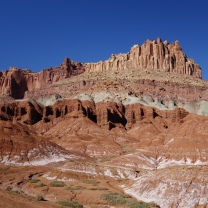 The next day was a brutal tour de force of uphills and heat, but a great feast for the eyes at the same time. Starting with a blood red sunrise above Capitol Reef, the morning continued with a long climb up Boulder Mountain. The barren rocks gave way to golden aspens and I found myself travelling through a stunning alpine environment all of a sudden, albeit with wide views of the desert below. 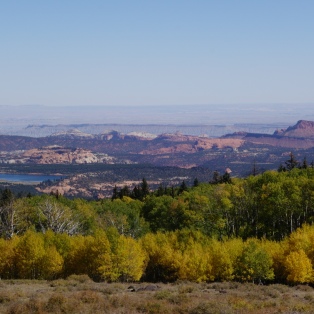 In the afternoon, I reached Boulder, where I implemented a short stop for more crackers and cheese. Freshly energized, I pushed on down the Hogback, a narrow ridge through a scenic canyon landscape, which makes for an incredible ride, and competes with the Going to the Sun road in Glacier for my favourite downhill of the entire journey.

The rest of the day was tough because of high temperatures and yet more hills, but the surroundings remained beautiful and diverse. I eventually got to the small town of Escalante, where I camped for two nights to recover. The rest day was mostly spent planning and reading, but I did head out for a hike through the local state park. It boasts petrified trees, millions of years old and insanely colourful. Then I broke yet another spork and bought a new one.

The day I left Escalante was rainy and grey. Gone was the glory of cycling through fascinating scenery, as my surroundings gradually became more dull. However, things seemed to be looking up when I stopped in Tropic for lunch. The food was delicious, the rain had stopped, and ahead lay the spectacular Bryce Canyon. Optimistically, I started the climb into the National Park, in spite of the still threatening clouds above me.

I didn’t get too far. As soon as I reached the top of the hill, I was hit by a massive thunderstorm, the likes of which I have never seen before. The heavy hail and rain started so abruptly that I was drenched to the skin before I even had a chance to stop and put on a jacket. I kept cycling for a while longer, but was now wet, cold, and grumpy on an exposed plateau, with lightning strikes coming down left, right, and center. The idea to go and check out Bryce Canyon was dropped right away. I also had planned to go at least another 30 km, but decided to call it a day and stay at a motel. I asked if I could pay the winter rate because it was wintery outside, which is the silliest argument in the world and I can’t believe it worked.

I left just before sunrise the next day, shoes now dry after a night on the heater fan. The route was on a bike path initially, taking me down through a nice canyon and into the cute town of Panguitch, which provided me with breakfast and supplies. The morning light made the surroundings look almost like Scotland in fall – not what I expected to find in Utah.

I was bound for Cedar City, which should really be called NOT Cedar City, because it’s named after the trees in the area, which are actually Juniper. Following Highway NOT 89 out of Panguitch, I started climbing once more. There were a few showers, but they were actually pleasant this time and cooled me down on the long uphill. Soon I was surrounded by a glorious display of autumn colours again.

Upon reaching the top, I entered Cedar Breaks National Monument. This probably marks the last time I will be above 3,000 meters of elevation on this trip. Stunning views over red sandstone cliffs and the distant hills abounded. The following 30 km downhill through Cedar Canyon was steep and fast. I got to town in the afternoon and met Joe, my warmshowers host for the night.