Hiking the cliffs of Zion and taking detours around the Grand Canyon burns a lot of calories, so offering me a go at a breakfast buffet is a rookie mistake. Meanwhile, Arizona has prepared a welcome of rain, wind, and frost.

The forecast for the day was 80 km, mostly downhill, with occasional ascents. This meant that I could take it very easy. I said my goodbyes to Joe, had breakfast in town, and left Cedar City on a bike path, heading south. This soon turned into a frontage road and then the shoulder of a busy interstate freeway. The headwind was strong, but pumpkin cookies and chocolate milk kept spirits high.

In the late afternoon, I reached Rockville, the home of my warmshowers hosts Robin and Tracy, as well as their three dogs and four cats. I stayed in a luxurious basement apartment for two nights. Rockville is a small village, just a few miles away from Zion National Park, so I used the rest day to explore the canyon with its towering cliffs. No cars are allowed in this part of the park and so I had the road for myself, with the exception of the occasional shuttle bus. Following a recommendation from my hosts, I hiked up to Observation Point, on a 13 km return trail carved into the very rock face. Both the views across Zion Canyon and the effort that must have gone into constructing the route were highly impressive. In the evening, I returned to Rockville and had dinner with my generous hosts. 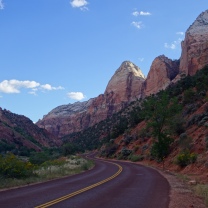 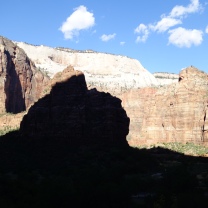 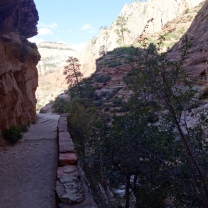 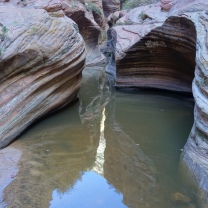 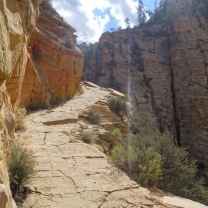 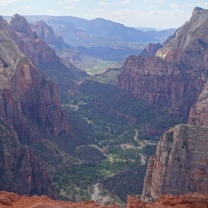 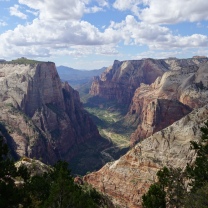 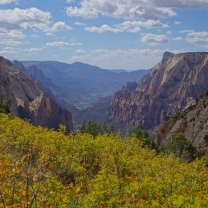 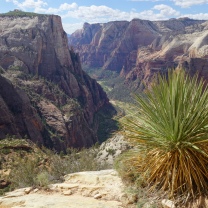 The route took me back into Zion the next morning. I travelled through some more amazing rock formations, hitched a short ride through a tunnel where cycling was prohibited, and left through the eastern park entrance. While I was trying to go further south, the Grand Canyon was blocking my path, meaning I had to travel east for two solid days first. The scenery around me changed rapidly beyond the park. I was initially going through farmland, but soon hit sagebrush country again. 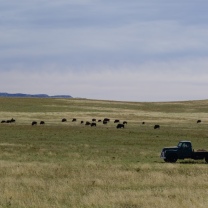 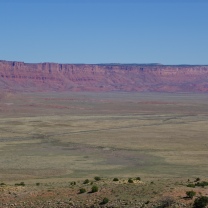 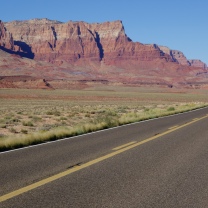 I stayed in a town called Kanab that evening, which had a hospital-turned-school-turned-hostel with a cowboy theme. It was my last night in Utah, and I entered Arizona early the next morning. A long uphill brought me to Jacob Lake, from where an even longer downhill – and a beautiful tailwind – took me to Lee’s Ferry, which is technically the beginning of the Grand Canyon. When I got to the campground, it was getting dark already and it was a case of Allep0.

Ahead lay a large stretch through the Navajo reservation, with no services for over 100 km. So, before crossing the Colorado River via the Navajo bridge, I went for breakfast at Marble Canyon. The only restaurant there had a fixed price breakfast buffet, which I decimated over the course of two hours (“I want to see him eat all that”). I couldn’t really walk anymore, but cycling seemed possible. It was a long day in the saddle though, with no shoulder, a lot of wind, and a lot of broken glass on the road. Let’s just say it was character-building. 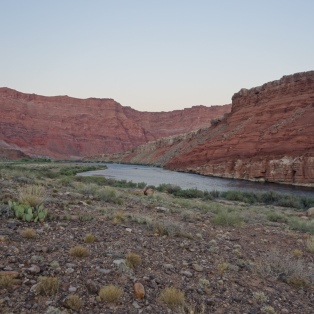 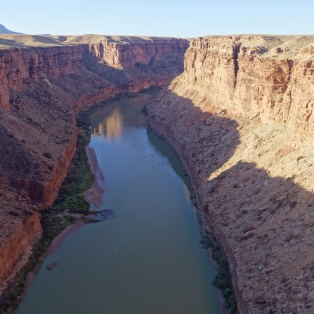 After an overnight stay at Cameron, I climbed up to the South Rim of the Grand Canyon. It was early afternoon when I entered the National Park and I managed to grab one of the last camp sites at Desert View. A short while later, William, a cyclist from LA, arrived at the now fully occupied campground, and so I offered to share the site with him. The rest of the day was spent exploring the surrounding canyon viewpoints. 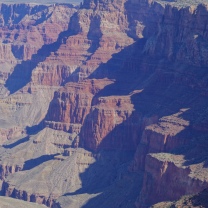 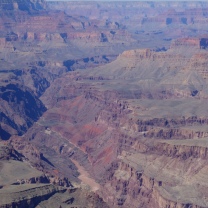 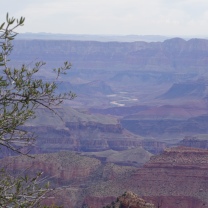 It was shaping up to be a very cold night. The forecast said temperatures below freezing, which my camping gear isn’t really designed to handle. The nearby trading post had two potential solutions in store: A clearance rack with Grand Canyon jumpers, which I could have used as an additional layer, or a 1.5 litre jug of cheap and nasty red wine. Both were 7.99 dollars, but the decision didn’t take long to make. Let’s just say the jumpers weren’t my colour.

Having survived the night wearing almost all my clothes, I opted to stay a bit longer and not travel that day. The wine might have reinforced that decision. I saw William off by riding with him for a while, then returned to the campground for food, audiobooks, and chats with a Czech couple that I was sharing the site with this time. Luckily some clouds formed in the evening and the night wasn’t as frosty as the one before.

The next morning, I took the splendid South Rim route, with glorious views of the canyon and some great bike paths. This led me out of the National Park and south towards Williams, were I had booked myself into a hostel. It was 130 km to get there, but the last 40 were brutal. Heavy rains, strong headwinds, and a long ascent had me pedal hard to arrive before sunset. 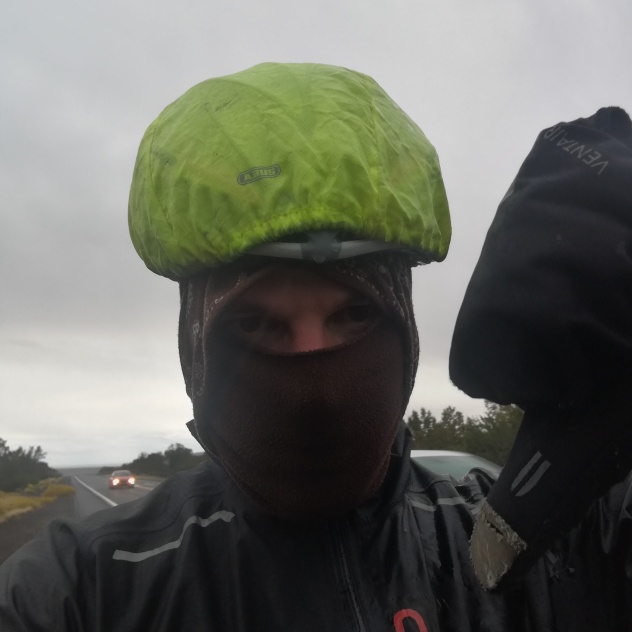 For some reason I got the hostel bed for 10 dollars instead of 30. Maybe it was pity because I hadn’t showered in five days. I should try that more often.