With two wheels once again firmly back on US soil, I continued riding north through the suburbs of San Diego, self proclaimed America’s finest city. I had been trying to find a warmshowers host but was unsuccessful and so checked into a hostel instead. It was a great place in the little Italy district, which was probably why it came with free pizza for dinner.

I quite liked San Diego and decided to stay an extra night. Frederick, one of the warmshowers people I had texted, got back to me and we went go-karting. It was just after the place had opened and so it was only the two of us racing. I scored the silver medal. After a burger lunch I spent the rest of the day exploring North Park with its coffee shops and breweries, got myself lost in the city centre, and took some pictures of the ships in the harbour. In the evening, I returned to the hostel and had some celebratory drinks (and free pizza) with Ingrid, a Norwegian cyclist who had just completed her trip from Florida to California.

It was a slow start the next day, followed by an even slower ride out of San Diego. I zigzagged around and spent the best part of the morning getting myself distracted by lively beaches and the pretty, if a little tacky, old town district. 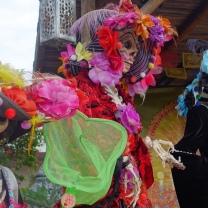 When I finally made my way out of the city proper, I was riding on scenic little bike paths along the coast. Everyone around me seemed to be very active: Lycra-clad road cyclists were everywhere, the sea was teeming with surfers, and I hadn’t seen that many people running since the free-food-emails back when I was in academia.

The destination for the day was San Elijo State Beach. This was the first campsite with a hiker/biker rate since Jenny Lake in Wyoming, about 10 weeks earlier. 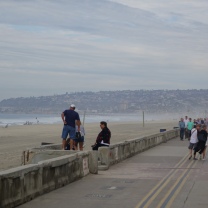 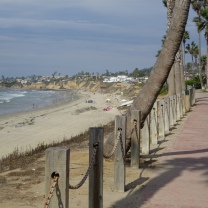 The campground wasn’t particularly nice though, it was crowded and tucked in next to a busy street and some well used train tracks. That being said, the views during sunset and sunrise were second to none. 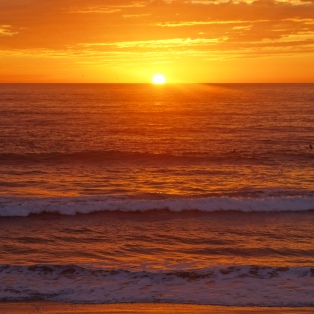 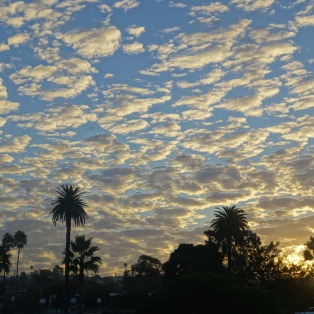 Winter was definitely coming. It was still nice and warm in Southern California, but by now, there were less than eleven hours of daylight left. I departed from San Elijo at dawn, in order to reach Huntington Beach in the evening, where I had arranged to stay with a warmshowers host. I managed to make good time initially, despite the headwind that started to appear as temperatures rose. Until I suddenly stood in front of a US marine base.

“No Sir, this is a military base, I can’t let you pass without clearance”, marine number one told me with a bored expression. The problem was that the only alternative was the interstate, and that was clearly signposted as off limits to cyclists. So after some hemming and hawing I made another attempt, only to get a similar rejection from marine number two. I was considering to hitchhike for a while, when they opened a third lane at the base entry checkpoint. Third time lucky I thought, and so I laid out my case to the third marine, who just nodded and said ok. Marines one and two gave marine three the same look that your parents give your grandmother after she just fed you three Snickers bars before dinner. I pushed on into and through the base before anyone would change their mind.

From there it was a straightforward ride to Bob’s house, where I enjoyed the comforts of a bed with adjustable firmness, as well as the attention of their Labrador puppy. When I left the next morning, it was a grey and rainy day. I was mostly cycling on bike paths along the beach, but stopped frequently for coffees or clam chowders. I had hoped to ride through Los Angeles in one day, but didn’t put much effort into that plan.

In the end, I booked myself into a hostel at Venice Beach. When the lady at the desk told me that I couldn’t bring the bike into the building, I wasn’t too happy. The area just screamed bike theft. I locked up my trusty steed and took off every bit of gear, just in case. My intuition was correct. When I checked on the bike in the morning, someone had undone my rear brake, clearly trying to steal the wheel. Luckily it is locked to the frame with a security skewer, so they took my dirty old water bottle instead. I had been thinking just that day that I really ought to clean it, as it had started to taste pretty disgusting. Now I’m glad I didn’t. I had already lost two other bottles the previous week, so I was down to zero. That of course was easily remedied with a visit to the local supermarket, although my setup looked a little less professional now.

From Venice Beach, I made my way further north, to Point Mugu State Park, where I pitched my tent and stayed for a night. The next day was a scenic coastal ride through Ventura and into Carpinteria, which has a State Beach campground. I explored town for a while and watched yet another stunning Pacific Coast sunset on the beach, before retiring to my tent.

After a long breakfast in one of the many cafes, I left Carpinteria to continue my northbound journey the next morning. Incredibly, I had a tailwind supporting me as I rode through Santa Barbara and into Refugio State Beach, which could only be described as paradise, if it wasn’t for the many bees and wasps. I hung out with Heather and Joey, who managed to fit a little bike escape into their already adventurous life of rafting rivers in Idaho, California, and Chile.

Because it was so nice and I was in no hurry, I decided to stay a second night and explore the hills in the area. I ventured up Refugio Road, to where apparently Ronald Reagan used to have his ranch. It was steep and tough, but came with spectacular views. 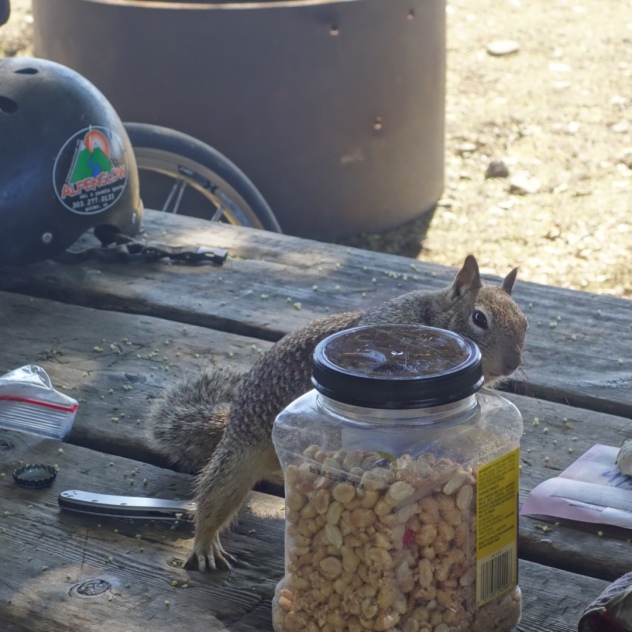 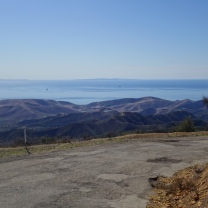 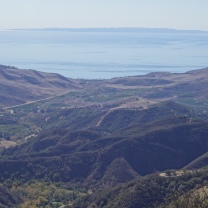 The afternoon brought a November swim in the freezing waters of the Pacific, beers with Heather and Joey, and grilled chicken generously donated by our camp neighbours. I’ve had worse days at the office.